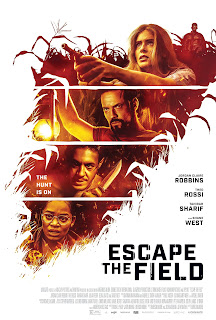 Stripped of their possessions, six strangers wake up in a remote, endless cornfield with six items -- a gun with a single bullet, matches, a lantern, a knife, a compass and a flask of water. As mysterious sirens blare in the distance and traps appear at every turn, they soon realize they're in a mysterious cat-and-mouse game with an unseen evil, and survival depends upon solving a diabolical and deadly puzzle.

Release date: May 6, 2022 (USA)
Director: Emerson Moore
Written by: Emerson Moore, Sean Wathen, Joshua Dobkin
Distributed by : Lionsgate
Starring: Theo Rossi (Sons of Anarchy, Luke Cage), Jordan Claire Robbins (The Umbrella Academy), and Shane West (A Walk To Remember, ER)
WHAT THIS MOVIE DOES WELL:  Right from the opening scene with a nice rippling fade in and sharp dolly pull out shot you immediately feel the sense of confusion, dread, and then quickly drop right into the claustrophobia of what is to come. This movie is extraordinarily well shot and well designed given the parameters in which it has to work and very little depth of field available.  What that means for the viewer is the opportunity to feel it, sense it, and be a part of the mystery and puzzle solving that quickly unfolds. A clever device that really will bring you in and keep you for a bit. The transitions are smooth, the "special effect" where in the threat is reveled is really nice here too. There is a lot that keeps you here and Emerson Moore's directing really shows a lot of control and lot of great design work that had good preparation written all over it, even if the case turns out that it was all on the fly (we as filmmakers are never given enough time).   The key ingredient to making something like this work once the established mood and tempo are well defined is the acting. In fact it almost leans heavily on this being you're only way to continue if you want to stay engaged here.

Shane West and Theo Rossi really do the support anchoring here and for the most part, they do it well. It leans on their veteran acting experience a lot and in the at regard they are clinical and very on point. The really fun turn for me here is Tahirah Sharif who plays Cameron. Her arc is really crucial to points of the story when it seems settled or a bit mundane. She grabs a hold of that and really does amazingly well to bring us back in or keep us there. I love the little subtle ticks and the change in looks that may not be all that noticeable at first but if you were to go back and wonder why this effects you the way it does, its that type of attention to detail that really is the reason. This movie leans a lot on Jordan Claire Robbins and she shows she can handle it. For her the best moments are watching her figure things out, especially at the very beginning and in the end.  The end comes and it does a nice job of tying as much as it wants to together. You are left with a few questions but not about the main group we are following throughout but more about the purpose. Which is a nice subtle nuance to movies like this and it has been proven to be effective in unnerving the audience and I don't think this one will disappoint in that regard.
WHY SHOULD WE CHAMPION THIS MOVIE: Of course you all probably saw the LionsGate hands on this and thought why would Joe even look at a movie like this? I am very much about championing the little guy Indie and I almost did in fact back away from this when it was presented to me but then I read about the story of this film. 15 years in the making, made on a low Indie budget, and it had to happen right in the middle of pandemic or it would have never happened. For that everyone involved gets credit from me and that is why you all are reading this review. The idea that Lionsgate put it out there in a wider scope for you, I am not going to ever fault a big studio for doing what we beg them to do here at Go Indie Now. I applaud them wholeheartedly.

Look in complete utter honesty this film is as good as it is frustrating, and in some ways the frustrating is even good because that's its intention. There is something for me that I can't quite put my finger on as to why I didn't completely buy in but that being said there is a lot of good and even some great here that makes it worth a watch at least.
It wont be for everybody but there is a good crowd of you that it will appeal to and that's if you are a fan of movies like the Cube Franchise, the 2015 Indie The Circle, and I would argue this is a way better pseudo version of the first Saw, giving us a cool puzzle to put together without the excessive and nonsensical side storyline that if you explained it to me a hundred times you would get the response, "Huh, why?". This movie doesn't do that, you get a lot of what you came to invest in it for and I think if you are looking for a mind fuck this movie is well worth 88 minutes of your time for that.
IF YOU WOULD LIKE TO CHECK IT OUT YOU CAN DO SO HERE 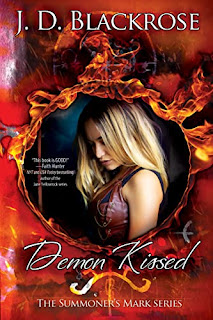 If you are thinking about what makes a great Indie novel, well then perhaps you have been Demon Kissed

DEMON KISSED BOOK 1 IN THE SUMMONER'S MARK SERIES PUBLISHED BY BELL BRIDGE BOOKS (PARANORMAL/URBAN FANTASY) BLURB:  My name is Rebecca, but everyone calls me Becs. Years ago, a mark appeared on my inner wrist--The Kiss, they call it--and it makes me a summoner. I can summon, well, things…entities of power, including demons. Which, I did, until recently. I quit, because I summoned a demon on behalf of a client and things went south. I fixed it, but now I owe that demon a favor and I don't know when he's going to call it in, or, what he's going to ask. One thing's for sure, it won't be kosher. Now I work in a fae bar, trying to stay out of trouble, waiting for the hammer to drop. But trouble tends to follow me. And my upstairs neighbor, Ash, seems to be right in the thick of it. He's gorgeous, with sexy curls, kissable lips, and a body to match. I can't believe someone like him even glanced my way. Things get complicated when a local mob boss wants my hel 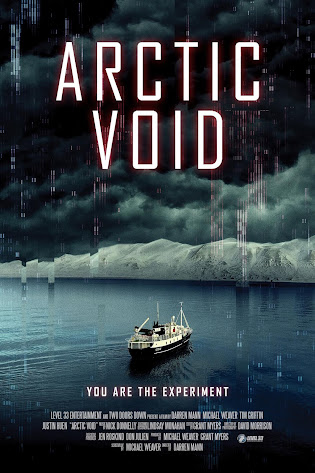 Early chills leads us into a very beautiful Arctic Void

ARCTIC VOID (FANTASY/PSYCHOLGICAL HORROR) SYNOPSIS: When the power mysteriously fails, and almost everyone vanishes from a small tourist vessel in the Arctic, fear becomes the master for the three who remain. Forced ashore, the men deteriorate in body and mind until a dark truth emerges that compels them to ally or perish. CO-WRITTEN AND DIRECTED BY DARREN MANN ALSO WRITTEN BY MICHAEL WEAVER & WILLIAM PAUL JONES STARRING MICHAEL WEAVER, TIM GRIFFIN,  RUNE TEMTE AND JUSTIN HUEN   WHAT THIS MOVIE DOES WELL: The set up and structure are really impressively sound here. Mann's command of our POV and what we see and how we see it really allows us to get absorbed and sucked into this movie pretty quickly. The shots are gorgeous and tension is very palatable throughout. Rune Temte has to be mentioned even though for the majority of the film Michael Weaver, Tim Griffin, and Justin Huen are all we have to guide us to the end and do a lot of great things to keep us around, especially G 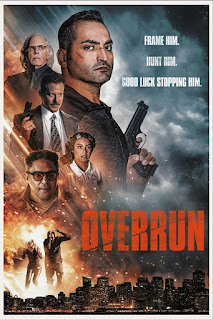 OVERRUN (ACTION/CRIME THRILLER) Written & Directed by Josh Tessier, Original Story by Craig R Key, Starring Omid Zader, Bruce Dern, Johnny Messner, William Katt, Nicholas Turturro, Robert Miano, and Chelsey Goldsmith SYNOPSIS: Former military extraction specialist Marcus Lombardi, whose only chance of saving his informant sister and their family is to track down a mysterious briefcase. WHAT THIS FILM DOES WELL: Hate to start with the obvious but when you got guys who have 20+ years and more film credits than can fill 1 page on a resume in Stunt Coordination and Stunt work with you got to mention how incredible these fights scenes were.  Moreover the way in which they are filmed, framed, choreographed all speak volumes in what makes this film so compelling and so enriching for an audience. Some of the purest and coolest motions and movements I have seen in a film, let alone in an Indie film. Then you add in the powerhouse talents of a Bruce Dern, Nicholas Turturro and Robert Mian